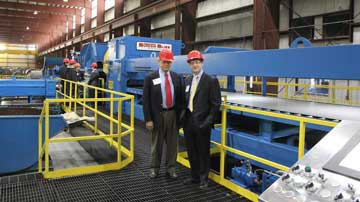 Not all that long ago Butech and Bliss were separate companies both located in Salem Ohio. In fact, until Butech purchased the manufacturing facilities and later the intellectual property of Bliss they were located across the street from one another. Bliss is a steel equipment manufacturing company that has a long heritage and reputation for building heavy-duty rolling mill equipment for ferrous and non-ferrous metal producers. Their existence can be traced back over 130 years or so when they were first established in Brooklyn, New York. Their engineering and manufacturing facilities are among the best available in North America.

Butech is a company that was formed by John Buta in 1985. Today, John Buta is president of the combined company known as Butech Bliss. When Butech started up in the mid-1980’s they had a small manufacturing shop and focused on developing some innovative machine technologies for the metals industry. Over a number of years, Butech became a world-renowned supplier of slitting lines, scrap choppers, side trimmers, shears, and hydraulic roller levelers. Because the manufacturing facilities were limited, Butech maintained a focus on manufacturing individual equipment including our cut-to-length-line equipment, until the company purchased the Bliss manufacturing facilities for steel equipment manufacturing.

While Butech Bliss is known around the world for its innovative, patented scrap chopper technology, it continues to leverage its comprehensive engineering services to ensure its customers are able to improve and enhance the production at our steel equipment manufacturing company throughout.

Send us a message to learn more about our equipment or services.
Our team can determine the best solution based on your requirements and offer a free quote.