Remember the 1970’s toy, Stretch Armstrong? Kids loved this action figure because its limbs could stretch and then return to original form. With heavy-gauge metal, however, one stretches it so it doesn’t return to its original form—which follows the contours of a mill coil, includes wavy edges, center buckle and crossbow. None of these conditions are wanted after the material is cut to length and shipped to laser
processors.

Feralloy Corp., a Chicago-based toll processor and large-volume distributor with eight plants across the United States and Mexico, has seen the tolerance requirements for dead-flat steel tighten over the past few years. To meet that demand, and to grow along with its customer base, the company has installed a stretch leveling cut-to-length line in Huger, South Carolina. This is the second Butech Bliss stretcher-leveler line and third Synergy roller leveling system incorporated into Feralloy cut-to-length lines. John Nagle, commercial manager for the Huger plant, says the new line possesses “amazing technology.” He’s referring, in part, to the Synergy Leveling System, installed last September. Feralloy’s new line processes hot-rolled and hot-rolled pickled and oiled steel, grades 50 through 80, from coils up to 3/4-inch thick and up to 74 inches wide. Line speeds are variable, up to 150 feet per minute. What sets the Butech Bliss line apart from other stretcher levelers is the
independent work roll drive system and a proprietary roll configuration that extends the working gauge range of the leveler without requiring roll cassette changes or two separate levelers. “The old line
was a conventional leveler, which cut up to 1/2-inch-thick steel.

However, it cannot compare with what new stretch leveling equipment can do: Promote a much flatter steel,” Nagle says. “People running lasers had problems with bowing because of the rolls being used on a conventional leveler.”

In contrast, the stretcher-leveler’s stationary head stays put and the other head stretches the sheet “to relieve every bit of residual stress,” Nagle says. With traditional leveling lines, heavy-gauge and light-gauge cassettes must “be switched out, resulting in downtime. With Synergy, one head goes in for all gauges without a cassette change.” Its series of rollers “can handle anything on the fly.

“That is a precursor to the actual stretch part of the line,” he continues. The shape is corrected first. Then, on the stretcher, the stationary and movable heads are 45 feet apart. One side holds the material in place while the other end pulls it. “It’s an amazing technology and the market is basically requiring this now.” Customers, he says, are impressed with the results.

“It has become the new norm.”

Al Waigand, vice president of sales and marketing for Salem, Ohio-based Butech Bliss, says longtime customer Feralloy keeps coming back for improved technology. The Synergy roller leveler preconditions the material prior to stretching.
“In a stretch-leveling line, the leveler doesn’t have to get rid of all shape defects but you must totally eliminate cross bow before [entering the stretcher].” To test the system, customers will purposely run material with wavy edges going into the stretcher in order to see those edges disappear during the stretch cycle. In a lot of cases, they will stop the cycle if the edge wave condition is gone. “You want to work the material past the yield point and make sure the shape is correct. That gives you memory-free steel quality. When you laser burn material that’s been stretched, it lays flat,” Waigand explains. Butech Bliss, he says, is among a select few machinery manufacturers that can build a conventional roller-levelercut-to-length line (CTL), a temper mill CTL and a stretch-leveling CTL. Since the 1980’s when more fabricators began using plasma and laser cutting, the flatness requirements have “grown exponentially.”

Some will argue that stand-alone roller levelers remain effective in producing flat, correctly shaped material for subsequent laser processing. However, it’s not 100 percent true. When the “material is stretched the grain structure of the material changes and internal stresses are eliminated. The grain becomes finer. Defects within the grain structure (called dislocations) become entangled; as a result the material stays flat during laser cutting,” Waigand says.

For the Feralloy project, Butech Bliss provided the new equipment, installed the mechanicals and all new drives and piping for the entire line; and Feralloy handled foundations and installation of electrical equipment, says Waigand.

Before installing the new stretcher leveler, the Huger plant ran two shifts five days a week and sometimes had “to run weekends, depending on backlog,” Nagle says.
“Today, we are running three shifts. We have more demand and volumes have gone up. We hired new employees just to keep up, both in our plant and in the office.” As Feralloy is on the campus of Nucor Corp.’s Berkeley mill, Nucor is its main steel supplier. By placing the processing center next door, inbound freight costs are negligible.

One of the drivers for the upgrade was to expand the gauge range. “We processed up to 1/2-inch-thick plate on the old line. The new line is rated 3/4-inch,” Nagle says. A typical incoming coil weighs about 23 tons, but some are much larger than that. On average, the gauges processed the most are 1/4 inch and 5/8 inch.  “Our customer base expanded with these capabilities,” according to Nagle. The finished material is shipped to makers of agricultural equipment and truck trailers, but heavy construction is a major market for Feralloy. The company first installed the same line at its Decatur, Alabama, plant. “The Decatur installation shortened our learning curve. We sent our employees from Huger there to learn the equipment. “It has given us competitive advantage. In addition to relieving residual stress, sometimes what happens is the metal would be fine in one portion, but in another part, the material would bow up when heat hit it, knocking the laser head off.” That no longer happens with stress relieved sheet and plate. Another advantage is “you have less head and tail scrap. On a conventional line, jogging it into the entry end, you’re scrapping a good amount. With stretching, hardly anything is scrapped head or tail,” Nagle says. Customers benefit with higher yields.

“Lights-out customers love this: The material is so good that they aren’t getting any calls on weekends,” he adds. A third benefit is that fabricators no longer have to leave a tab of steel around every part to avoid the bow. “Now, you don’t have to tab and you don’t have to cut tabs off,” which saves time and material. In addition, laser-cutting shops are able “to nest all the way to the edges. Before, they may have left 6 to 10 inches on either side, wasting much of the sheet. Not any more,” Nagle says.

Lastly, stretcher-leveled sheet and plate allow customers to hold higher tolerances when bending parts. “It won’t be out of spec anymore, which
means less post processing.”

Customers tend to “learn to live with something they don’t need to be living with,” says Nagle. “We’ll talk to a purchasing manager and he says, ‘We don’t have a problem.’ Then we go into the shop and the laser machine operator says, ‘The flatness is awful.’ The purchasing agent looks at him, ‘Why is this the first time I’m hearing of this?’ Operators,” continues Nagle, “figure out ways around the problems, but that adds extra expense and time.” The market is asking for the flattest material possible. “That’s why we invested the money and we are seeing benefits right out of the gate. When customers see it, it changes their perspective.”

“WITH SYNERGY, ONE HEAD GOES IN FOR ALL GAUGES WITHOUT A CASSETTE CHANGE. ITS SERIES OF ROLLERS CAN HANDLE ANYTHING ON THE FLY.” - JOHN NAGLE, FERALLOY

The Synergy Leveling System installed at Feralloy’s Huger, South Carolina, plant processes hot-rolled and hot-rolled pickled and oiled steel, grades 50 through 80, from coils up to 3/4-inch thick and up to 74 inches wide. “Our customer base expanded with these capabilities,” says Feralloy’s Nagle. Leveled material is shipped to makers of agricultural equipment and truck trailers, and construction sites. 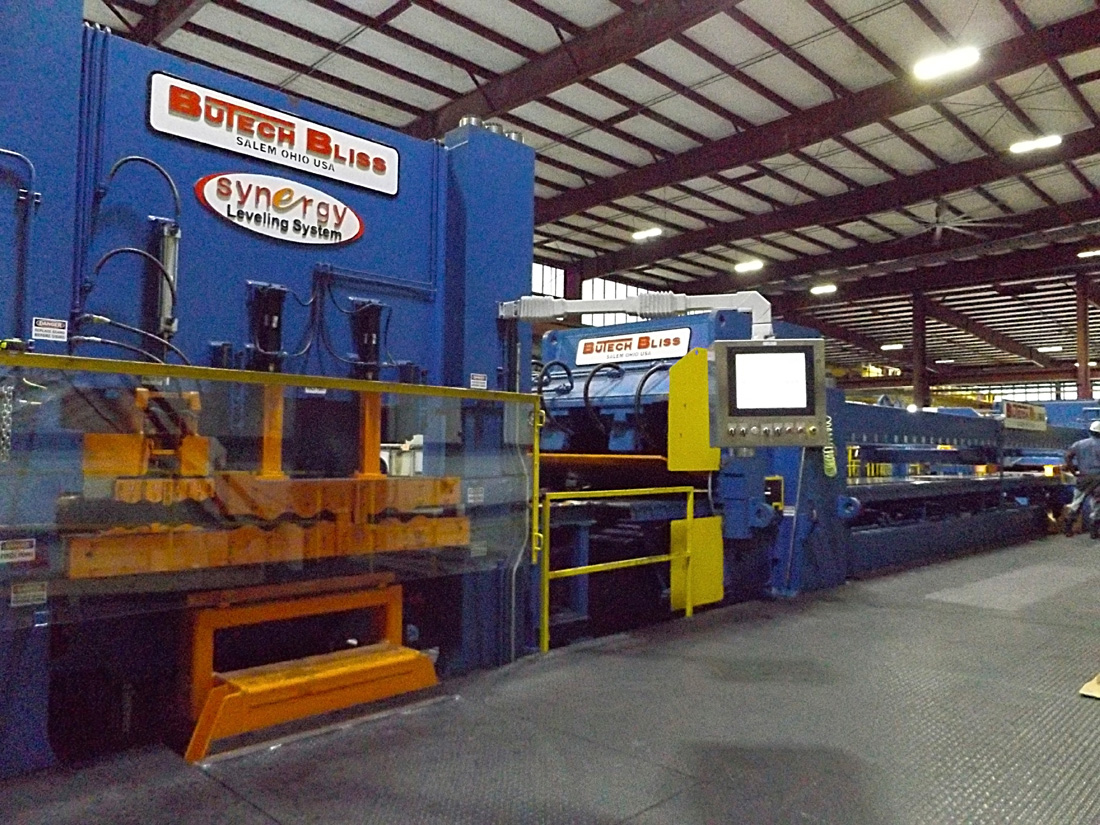 Send us a message to learn more about our equipment or services.
Our team can determine the best solution based on your requirements and offer a free quote.